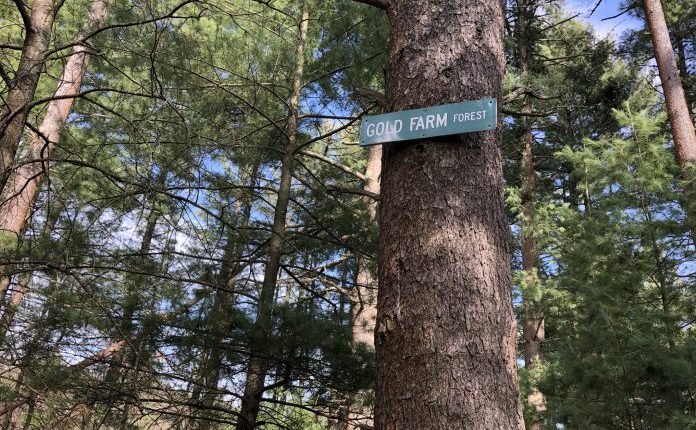 NORTH SMITHFIELD – While planners admitted that the project is far more unique and collaborative than others that have come before them, a discussion about a proposal to install a solar array on the Mattity Road property owned by David Gold this week nonetheless brought out concerns regarding the wisdom of cutting down trees, and of allowing exceptions to the town’s recently established zoning ordinance.

“Why do we need solar at all?” asked resident John Casey. “I’ve seen what they’re doing on Iron Mine Hill Road and it’s too much. I can’t believe we have this beautiful town and we’re just leveling it.”

Ultimately, the board remained split on the preliminary proposal, now set to come back before planners with additional information on Thursday, July 2.

The project would see a 9-megawatt AC and 12-megawatt DC ground-mounted solar system built on a 36-acre portion of Gold’s 140-acre property, with 56 acres of the lot gifted to the town upon approval.

A 25-year lease with the solar company would come with two five-year options for renewal, with that portion of the property also donated to the town once the project is complete.

But one area where Gold has established a maze of hiking trails would have to be cleared to make way for the array.  Zoners would have to grant the developer both a special use permit and a dimensional variance for the construction. And a mysterious conservation easement on the property would have to be “relocated.”

Solar developer Anthony DelVicario has a contract for rights to develop the property, and hopes to install panels on a 1,367,267-square-foot wooded area, with an entrance to the property established off Mattity Road. Initial site plans designed by DiPrete Engineering show panels on 34 percent of one 124-acre lot owned by Gold, rather than the 20 percent allowed by ordinance.

The developer would also seek relief from a clause limiting solar projects to 6 acres, looking to build instead on 36.

As the proposal was presented at a virtual meeting on Thursday, May 21, Planner Jeffrey Porter repeated a statement he’s recently made to several developers seeking variations from the town’s newly established solar ordinance.

“I’m starting to sound like a broken record,” Porter said. “We just went through our solar ordinance extensively. We really need to stick to our guns.”

But Planner Richard Keene, who also serves as president of the North Smithfield Heritage Association, noted that the historical sites that would be given to the town as part of the deal are “significant.”

For the past several months, Gold has opened the private property to visitors, allowing guests to hike some six miles of trails he has built on the land. The property boasts an abundance of historic features, including two historic cemeteries, the remains of a piggery built in the 1850s, two native American archeological sites and a former railroad station.

For years, town officials have considered purchasing the land for open space and conservation, but an agreement has never been reached despite potential funding for the expense in the form of bonds and grants.

Owner Gold was left angered by the process, and has said that after walking out of a meeting last year where town officials presented a low-ball offer of $800,000, he signed a deal with a solar developer for significantly more.

SAGE Environmental project manager Nicole Mulanaphy noted that the Rhode Island Historic Preservation Commission surveyed Gold’s land in the mid-1990s. Historic features identified on the property, Mulanaphy said, would not be affected by the current proposal, and are all outside the required 500-foot buffer.

“There’s a lot I like about this proposal,” Keene said on Thursday.

Planner Roland Menard agreed with Keene’s assessment on value, pointing to the benefit for the town and residents in the future.

“Most of us will probably not see the full effect of this, but our children and grandchildren will,” Menard said.

Both planners in favor of the deal recommended that others walk the property to see exactly what the town would be gaining.

Planning Board Chairman Gary Palardy noted that if the project is approved, much of the area where residents have recently enjoyed scenic hikes would be dedicated to solar panels. Maps matching DiPrete site plans with Gold’s trail system – represented in yellow lines – demonstrated that miles of hiking space by the Mattity Road entrance would be destroyed. The north west portion of the parcel abutting Tarkiln Pond would remain, and developers said they would also consider building a passage through the panels connecting to the northern trail system. 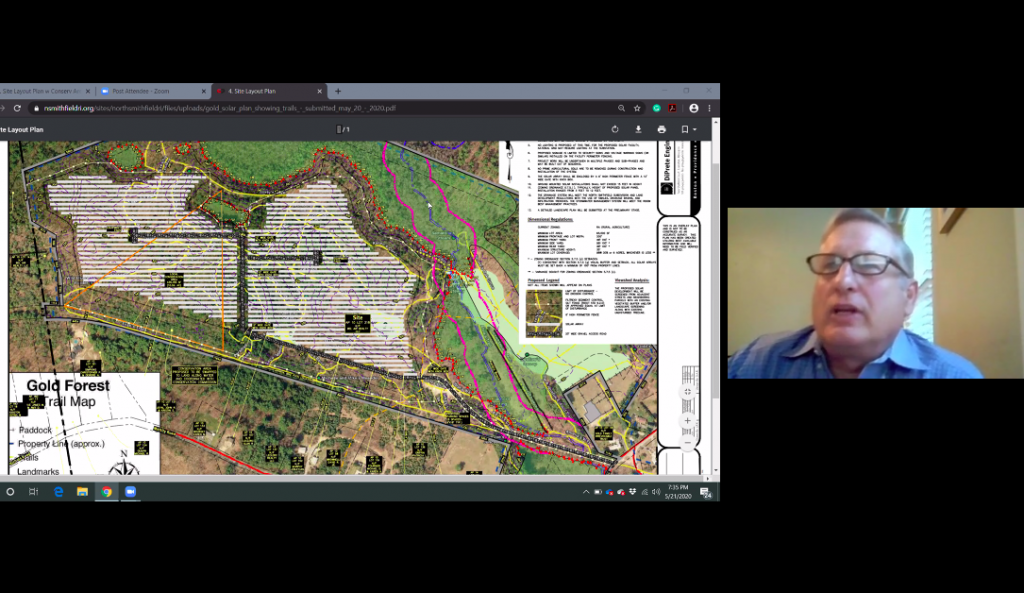 “Just judging by the amount of yellow lines, a substantial part would be gone,” Palardy said. “I think that’s an important aspect to look at.”

“Mr. Gold has been very generous in allowing people to come and see it,” Palardy noted. “People don’t want to be walking through a solar farm.”

While planners will not have the final say on the zoning issues for the project, the developer is currently seeking a recommendation from the board before heading to the next stage in the approval process. John Mancini, an attorney working on behalf of the developer, presented the preliminary plan as flexible, and said they intend to establish new trails to make up for what’s lost.

“We’d have to evaluate where other pathways could go,” Mancini said.

A triangle-shaped town-held conservation easement located in the area slated for solar also presented questions for planners. The land-locked easement was established by the town in 1992, but the attorney noted that no one seems to know why.

“The document itself is not very specific,” said Mancini. “We will further investigate that. It’s very weird.”

The attorney described the plan to gift the 56-acre parcel as a relocation of the conservation easement.

Planner Megan Staples expressed concern that much of the new conservation parcel would be comprised of unbuildable wetlands.

“I don’t want the town to get nothing but wetlands that would be protected anyways,” Staples said.

Mulanaphy noted of the north east parcel, “From a conservation perspective it’s a better area to conserve.”

“Once we have the special use permit, then we can delve into the engineering aspect,” Mancini said of Staples’ request for wetland information.

The attorney urged planners to consider the overall benefit of the project, noting that the town would receive tax revenue from the solar array for the next 25-35 years, and would then own the entire parcel.

“The town, on the onset, gets immediately the 56 acres,” Mancini said, noting of the proposed 36-acre solar lot, “This is going to be a temporary use for this site.”

Mancini said the plan is also flexible regarding the length of time for the array, noting that tax incentives, currently set to expire in 2050, are what make the plan attractive from a financial standpoint.

“You can call it a gold rush in renewable energy,” he said of the many solar projects now under consideration across Rhode Island.

Palardy pointed out that the land where the panels would be built won’t be the same for many years to come.

“It may be temporary use, but the first part of that use is to strip the vegetation. You’re not going to have 80-year-old trees again until another 80 years after that,” Palardy said. “It’s going to be three or four generations.”

Mancini responded that by comparison, in development, “You don’t get a temporary plaza.”

While all admitted the offer is different and potentially more attractive than other solar plans, talk often turned to the space on Iron Mine Hill Road where Green Energy Development has been clear-cutting acres of forest to establish their solar array.

“That’s an improvement from some other proposals we’ve seen,” said resident Cynthia Roberts of the plan to offer the town land.

However, Roberts added, “Our community is losing its way of life and it will never come back.”

Roberts, who co-founded community group Engage NS, pointed out that more than 40 people were in attendance for the Zoom meeting.

“It’s probably the issue that most North Smithfield people engage on, is conservation and open space,” she said.

Chris Simpkins, who owns a lot abutting the southwestern edge of the property, just 200 feet from the area slated for solar, thanked Gold for allowing guests to use his land during the ongoing pandemic.

“My family has enjoyed some ‘forest batheing,’ as he likes to put it,” Simpkins said.

“We’re relatively close to what’s going to be going on here,” said Simpkins, questioning when the developer plans to lay out more specifics of the project. “Those details matter to us now. Can they really commit to making sure that us and our privacy will be respected?”

Of the easement, Simpkins added, “It just doesn’t make sense to us that it can be picked up and moved somewhere else.”

Mancini proposed that a green light from planners could be contingent on working out a buffering plan with the abutter.

Palardy said he was inclined to continue conversations with the developer, rather than taking an “all or nothing,” stance.

“I’ve made the statement that this is a very different approach, and much more than collaborative than others we’ve seen,” the planning chairman said.

In a unanimous vote, the planners agreed to have the developers come back on July 2 with details on how the lots would be deeded to the town, more information on the conservation easement, and the full historic report from RIHPC, and established other conditions for consideration, such as working out a plan for buffering.

NRI NOW will publish details on how to attend the meeting once they are established.