No vote on controversial wind turbine 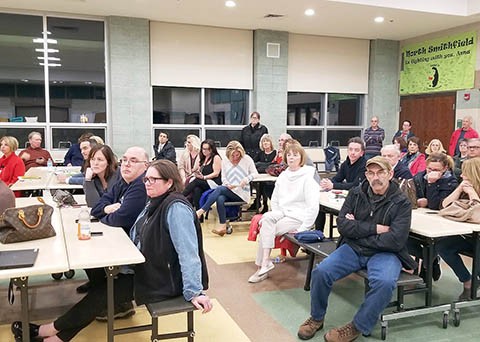 NORTH SMITHFIELD – Residents will have to wait at least another month to learn the outcome of a wind turbine proposed for Old Smithfield Road after a third meeting on the topic failed to bring a vote Tuesday night.

After two-and-a-half hours of testimony, members of the Zoning Board decided to hold off until their next meeting, tentatively scheduled for June 25, to begin final deliberations on a project that has pitted renewable energy company Green Development and property owner Ruth Pacheco against residents of Old Smithfield Road. The decision came as a disappointment for some residents, many of whom have waited through nine hours of testimony over three months to see if the board will allow the project to move forward.

At Tuesday’s meeting, board members, led by Chairman Robert Najarian, questioned Green Development Chairman Mark DePasquale and his team of experts on everything from the length of the turbine blades to how much concrete will form the base of the 462.5-foot structure. Much of the questioning centered around the noise and shadows generated by the spinning blades, a source of contention that drew neighbors of Green Development’s other turbines to the North Smithfield Middle School cafeteria to voice their complaints.

Last month, residents of Portsmouth, Cranston and Coventry told board members the noise of the spinning blades kept them up at night and health problems such as pressure headaches and migraines.

In response to questions from the board, Green Development representatives said the noise of the turbine would not exceed the town’s noise ordinance, which permits sound levels up to 53 decibels during the day and 43 decibels at night in a residential area. They said the “shadow flicker” caused by the spinning blades would not exceed 30 hours per year for any one resident and a built-in module could shut it down if the turbine was in danger of exceeding that. In the case of excessive noise, the turbine would not stop operation unless a resident submitted a formal noise complaint that was then verified by a third party noise report commissioned by Green Development.

“It will not exceed, and if it does, there’s a mechanism by which the town can enforce,” said John Mancini, the attorney representing the company.
DePasquale also answered questions about how the company plans to transport the 82-foot long blades to the property for assembly. The company, he said, uses special equipment lifts and turns the blades as they’re moved, a system that was recently used to transport a blade into the Rhode Island Convention Center. He said he does not anticipate any trouble maneuvering around trees or property on Old Smithfield Road, though the company does plan to apply for permits to the Department of Transportation.

In addition to the company, board members heard from residents, including Nicole Valliere, who purchased the house immediately next door to the Pacheco property for $925,000 in March. Valliere told board members she was not aware of the turbine plans until after the sale closed and would never have purchased the property if the information was available.

“We had no idea this was happening,” she said. “We never, ever, ever would’ve purchased our home.”

The proposed turbine would stand 462.5 feet high and disturb approximately 1.5 acres of the 53-acre property. Due to the height of the turbine and its use, the project requires both a special use permit and a dimensional variance to move forward.

The project is a continuation of a 2016 plan submitted by Green Development. At the time, the turbine received preliminary approval from the Planning Board before opposition from residents halted it before the Zoning Board. The Town Council later voted to ban wind turbines but, since the application was submitted prior to that policy, the project can still continue if it receives the necessary approvals from town boards.

Smithfield landlord tries to halt Board of Elections’ move to Cranston
Comments are closed.