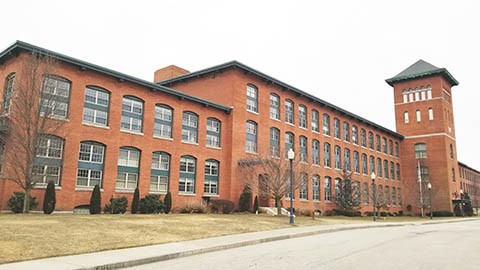 NORTH SMITHFIELD – When the Blackstone-Smithfield Corporation received Zoning Board approval to build 120 high-end condos in the former Tupperware Mill in 2006, the century-old industrial building had seen better days. Plans to rent out its three floors to small manufacturers never fully panned out, and a roof in need of replacing prompted the company, which had owned the building since 1987, to pitch the condo project. The time was right for a mill renovation project, and a housing boom promised to draw single professionals and other potential buyers to the new space.

Thirteen years later, the High Rocks Condominiums project on Tupperware Drive is approaching completion. Units have sold for $250,000 to $275,000 on average, with the most expensive unit going for $409,000. The mixed-use building still contains some commercial tenants, but a homeowners’ association oversees the majority of the residential units and common areas.

Now an unusual circumstance has put the final touches of the project on hold and landed the developers and their attorney before the Planning Board last week. As part of the original agreement, the town stipulated the project must designate at least 10 percent of units as affordable housing. The requirement was intended to help the town reach its own state-mandated 10 percent minimum for affordable housing.

Those affordable units have failed to materialize, and members of the new Planning Board want to know why. Last Thursday, Feb. 7, Attorney John Mancini addressed the situation before the board on behalf of the developer. According to Mancini, the company had originally intended to hit the affordable housing minimum when they began construction in 2007 but ran into unexpected trouble.

“The project kind of hit some turbulence in that process,” he explained.

That “turbulence” was the housing market crash of 2008. With values down from when the project was approved, the company was forced to sell many of the units under their anticipated value, with more than half of the first phase of 40 units selling at prices that would be considered “affordable,” according to Mancini. State law defines “affordable housing,” in the case of a sale, as units in which principal, interest, taxes and insurance constitute no more than 30 percent of the gross income of a household with no more than 120 percent of area median income. At the time, Mancini said, two-bedroom, two-bathroom units were selling for between $159,000 and $200,000.

However, the relatively low price of the units wasn’t enough. To satisfy state affordable housing regulations, the units needed to have a 30-year deed restriction to prevent owners from reselling them at market value. Herbert Ingram, one of the principals of the Blackstone-Smithfield Corporation, explained the situation in a letter addressed to town Building Inspector Kerry Anderson. Buyers, he said, were not interested in the deed-restricted units at a time when they could purchase a unit at market rate for a similar price.

“The town had no incentive program to allow buyers to buy deed-restricted units when they could buy the same unit for the same price with no restrictions,” wrote Ingram. “After meeting with the affordable housing agency, they chose not to participate for the same reasons.”

Several years went by, and the company continued to sell units at market value. The town, meanwhile, continued issuing building permits and certificates of occupancy as the units were built and sold. When a commercial tenant left the building, opening up more space for residential units, the company applied for, and was granted, additional building permits beyond the original 120-unit plan.

Then, last year, an unrelated dispute between the developer and the homeowners’ association drew the town’s attention to the almost-finished project. In September, Anderson notified the corporation they would not receive any further building permits or certificates of occupancy until they addressed several issues with the project, including the lack of affordable housing. According to Armen Harootian, another principal of the company, the town’s cease and desist order left them with a number of partially built units “in limbo,” unable to be sold without a certificate of occupancy.

Last week, the developer proposed a solution that was received favorably by members of the Planning Board. Twelve unsold units within the building, including some currently used as rental units, would be reserved as affordable rental units. By renting instead of selling the units, said Mancini, the company would avoid the pitfalls encountered earlier and be able to comply with state affordable housing regulations without affecting the value of current units.

“The distinction this time around is we’ll enter into a monitoring agreement with Rhode Island Housing (the agency that oversees the state’s affordable housing program) for those units,” he said.

For Harootian, the news that the town would accept the affordable rental unit compromise was a relief. The project, he said, has been held up in its final stages and is now likely to be delayed until the fall.

“The reason we got through this is we’ve got deep pockets, so we were able to weather the storm,” he told The Breeze.

The 12-year process left its mark. Last year, the Blackstone-Smithfield Corporation transferred the remainder of its assets in the property to High Rocks II, a new LLC managed by Harootian. The other three investors who were originally a part of the Blackstone-Smithfield Corporation are no longer involved with the property. According to Mancini, the corporation exists now only as a “shell corporation” maintaining the liabilities, though none of the properties, of the original development.

As of last week, both sides indicated the company should move forward with its plans to establish 12 affordable rental units. Town officials said they will continue to withhold building permits and certificates of occupancy until the matter is resolved.