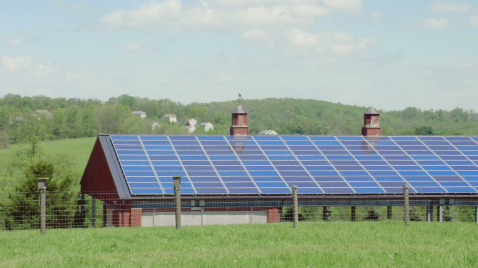 TIVERTON — The Brayton Road Solar farm will be smaller than proposed after the developer agreed to decrease the size of the project because of concerns from the Planning Board and Conservation Commission, but it is still the biggest proposed solar project to date in town, with a projected 55.2 acres of panels.

The project won master plan approval from the Planning Board this week.

The plan for the large solar farm was put forth last August before the Town Council voted late last year to repeal the town’s solar ordinance and work on a new one that would not compromise so much farmland and woodland.

The original proposal for Brayton Road Solar was for a 21.4 megawatt project that would have 63.1 acres of panels and require selective clearing and clear cutting 74.6 acres of former farmland and woodland at 390, 394 and 446 Brayton Road, including 10,000 trees. It has been reduced to 14.2 megawatts and 55.2 acres of panels, with 66.8 acres of the 101-acre parcel to be cleared, engineer David Russo of DiPrete Engineering told the Planning Board, but by the end of the meeting Tuesday just before midnight, the developer agreed to reduce by 10% the number of healthy trees that would be cut.

Stuart Hardy, vice chairman of the Planning Board, had asked for 20% fewer healthy trees cut, based on a recommendation from the Conservation Commission that also recommended a 200-foot buffer around wetlands and property lines.

In a letter to the Planning Board, Conservation Commission Chairman Thomas Ramotowski said the “consensus of the commission was that the size of the project, and its potential scope and impact on the environment, was too large for a town like Tiverton that values its open space and forests and which seeks to preserve its rural integrity.”

Planning Board Chairwoman Susan Gill said saving 20% of the healthy trees would represent about 5 acres.

“This project has a scale I’m not comfortable with,” Hardy said. “If we could make a little dent in that scale,” he said, making it clear he would not back down, but after Russo said a 200-foot buffer would affect the layout of the entire project and “eat up a lot of areas for solar panels,“and Mancini said it would require a redesign of the entire project, Hardy compromised. His recommendation to lower to 10% fewer healthy trees cut was agreed to. Increased buffers near the vernal pool in the southwest portion of the property, which is a breeding area for salamanders and frogs was included in the conditions for master plan approval.

There will also be what Russo called “supplemental buffering” or plantings that would increase the density of the buffers.

Pollinator plants will be planted near the solar panels and nesting boxes will be installed “to promote and add a more diverse habitat,” engineer Nicole Mulanaphy said. She said the clearing of the land for solar panels “will be beneficial for some species and not for others.”

“I don’t understand how birds will come to a grassland that has solar panels,” resident Susan Anderson said. She had been vocal about solar projects on farmland in town. “This really should not take place at all on this property,” she said of the project, and questioned if National Grid had the capacity for all of the solar projects proposed in the state.

Mancini said they plan to do a study to determine the capacity and will not build it until National Grid signs an agreement to accept the power that would be generated.

The next step in the process is for the developer to come back to the Planning Board with a preliminary plan that has much more detailed information.

Pond storage unit gets zoning OK, but battle far from over

Board of Elections wants to move to Cranston. But a lawsuit says it’s part of a ‘sham’
Comments are closed.